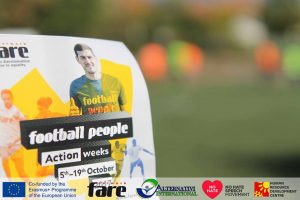 On 17.10.2017 Association Alternativi International organised a football tournament in a local school at city of Kocherinovo. The tournament was part of Football people action weeks – 05.10 – 19.10.2017, an initiative in the franework of FARE Networ

Students from different grades and ages as well as social and ethnic backgrounds showed their parents, teachers and classmates that football is a game which can unite everyone no matter their gender, religion, social status and etnicity and showed that we all are people and humanity should be our priority.

Take a look on final video of event and see the unforgettable moments which we had during the tournament.